Raving about and recommending the use of beautiful reclaimed antique lumber is easy. Antique lumber enhances every setting. It is incredibly versatile, authentic, and adapts perfectly to all projects. The product speaks for itself. But as many voices add credence to any saying, here is also what others have to say!

Over the past few months, (which originally started germinating last year) when we first began the lengthy process of compiling photos and info for our “New and Improved – BRING ANTIQUE LUMBER TO THE MASSES WHO DON’T KNOW WHAT THEY ARE MISSING OUT ON !!” web site, I have been perusing and sticking little green page markers to every decorating, house and home magazine and catalogue which found its way into my mail-box. So many so, I might add, that I dispatch my daughter daily to the retrieve the post with a back-pack, so as not to strain her little frame !

Green stickers “festoon” the edges or every book! Antique Lumber is everywhere ! here are a few links to articles that I particularly like. Some are from a few months back, because as I mentioned – this has been a long time in the creating. 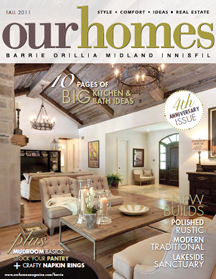 Without further ado I am standing up in my office chair cheering and clapping (an incredibly stupid and dangerous move as it is on castors) for the amazing job builder Cole Leibel of Big East Construction and designer Kristylynn Banman of KL Interior Design did on a home in Innisfil, Ontario, as featured Our Homes Fall 2011. The use of reclaimed grey barn board on the ceiling looks amazing and complements the stone walls, furnishing, windows and rustic fireplace mantle perfectly. I applaud that designer was not overly fussy with keeping the grey board on the ceiling perfectly matching. Each piece of board lends character to the space rather then blending into each other. (And in the reclaimed barn wood world having a monotone look with grey board is hard to achieve as normally only one side of the barn matches within itself, each of the four sides differ due to sun and wind exposure.) The home incorporated lots of texture and natural elements. A neutral palette creates a very relaxed but polished look. A perfect blend of modern and rustic. Just wish they would have used true authentic reclaimed barn beams as accents on the ceiling and not boxed beams with board.

Next, in contrast to the home in Innsifil is a beautifully raw and rustic 1830’s home in New York’s Catskill Mountains owned by Torontonians Ray Camano and Don Howell, as featured in Canadian House & Home October 2012.

The decorating of this house looks like it was collected over decades of choosing just the right pieces, that while they do not match individually come together to create a vision of welcome, and rustic charm.

{Looks however can be incredibly deceiving…and hallelujah for that!! Imagine what the school yard duty teacher would think if she knew what I really had on underneath my long winter coat and high clunky boots when I drop off my girls in the morning. A visual hint – picture the t-shirt that you eventually discard to dust your furniture with… my nightgown has seen better days.}

It is therefore interesting to learn in the article that the semblance of a heirloom filled utilitarian home is just that, a well planned decorating scheme illusion – in actuality every single detail was carefully selected and planned. That underneath the unassuming cabin charm is a fully equipped modern day home. Rather then bringing the new to the old – they carefully decorated to the most minute detail and kept the historic charm. Kitchen cabinets are built from reclaimed barn brown board and the floors are authentic wherever was possible.

In both of these homes antique lumber works and works well. It lends itself in style, charm and allure to both a very modern and contemporary home and shines thru to its roots in a historic 1830’s cabin!

Recent Posts for In the Now

Recent Posts for Our Blog